In the early part of the 20th century, Samuel F.B. Morse was challenged to make the Pebble Beach area an appealing and profitable real estate investment, with the goal of finding a buyer. He decided to create a one-of-a-kind golf course, one with unsurpassed scenic beauty, as well as an element of difficulty that would always be challenging, but never conquered.

Because his job was liquidation, not development, he had to minimize costs. He convinced his board that the course could be maintained by sheep, and designed at no cost by two amateur golfers: Jack Neville and Douglas Grant. One of those ideas was better than the other.

Although neither Neville nor Grant had any experience at course design, the pair designed a championship course that has seen remarkably few changes over the years. The course you now play is a testament to the extraordinary talent and vision of Jack Neville and Douglas Grant. 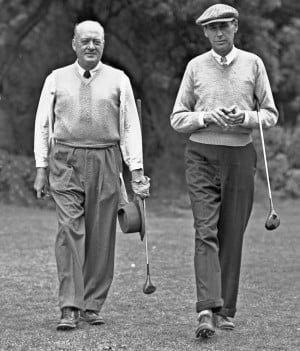 “It was all there in plain sight. Very little clearing was necessary. The big thing, naturally, was to get as many holes as possible along the bay. It took a little imagination, but not much. Years before it was built, I could see this place as a golf links. Nature had intended it to be nothing else. All we did was cut away a few trees, install a few sprinklers, and sow a little seed.”

Morse’s plan did attract the right buyer. In February 1919, shortly after Pebble Beach Golf Links opened, Morse founded Del Monte Properties Company and bought the property himself. He headed the golfing empire for the next 50 years, until his death in 1969.

When he was asked to build Pebble Beach, Jack Neville was a two-time past champion of the California State Amateur Championship. Neville won the inaugural event in 1912 at the age of 20, and would go on to win a record five times. Neville won his third state championship in 1919, the final year it was held at Del Monte. The championship then moved to his Pebble Beach, and he won two more titles in 1922 and 1929. Neville also enjoyed the thrill of playing with Bobby Jones during their two rounds of medal play at the 1929 U.S. Amateur.

Neville stayed on at Pebble Beach as a real estate salesman for most of his life, and assisted Peter Hay in designing his 9-hole course in 1957. Reports also suggest Neville did a preliminary design for The Links at Spanish Bay, but no drawings exist. Sandy Tatum also consulted with Neville while preparing Pebble Beach for the 1972 U.S. Open. Neville died in 1978 at the age of 86.

Douglas Grant had won the 1908 Pacific Coast Championship (which pre-dated the California Amateur) before moving to England. He returned to California in 1916, due to World War I. Upon his return, Grant finished runner-up in the 1916 Western Amateur at Del Monte, and was medalist three straight years at the California Amateur (1917-1919), winning it all in 1918.

In late 1919, Grant returned to England with his family where he won many other championships and served as Captain of the Royal St. George’s Golf Club in Sandwich, England. Grant died in 1966 at the age of 78.

The First Round of Improvements

When the course was completed in 1919, the California Golf Association was not willing to accept Pebble Beach Golf Links for the State Amateur. So Morse turned to his course professional Harold Sampson to improve the turf and playability of the course. Sampson was assisted by a number of top amateurs, most notably Arthur Vincent.

Celebrated as one of the first native U.S. golf professionals, Sampson was born on March 25, 1895 in Bangor, California to Swedish immigrant parents. Harold Sampson served as the Del Monte Golf Course professional from 1915 until 1919, when he was put in charge of Pebble Beach Golf Links. He was the professional and chief agronomist until 1922.

Arthur Vincent moved to California from Michigan for lumber business in 1910. An avid golfer, Vincent quickly fit into San Francisco society and played in many championships. He built a home on 17-Mile Drive and helped Sampson direct some of the first work on Pebble Beach Golf Links.

Following the 1921 State Amateur Championship, Morse turned to Fowler to resolve the complaints over the short 379-yard par-4 finishing hole. Assisted by Arthur Vincent and Mark Daniels, Fowler transformed the 18th hole to a 535-yard par 5 that is now known as the best finishing hole in golf.

Born the son of a barrister, Herbert Fowler was the product of the wealthy and enlightened society of the late Victorian period. He first played golf at the age of 23. He became a member of the Royal and Ancient in 1894, and in 1902, was elected to the greens committee.

Although only an amateur both as a player and as an architect, Fowler was a visionary golf course designer. His first course was the famous Walton Heath in England, where he remained as a member until his death. 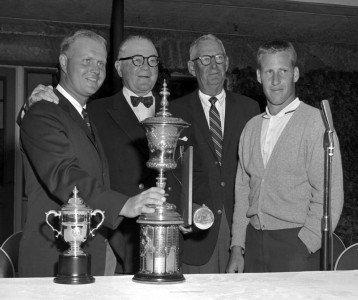 Preparations for the 1929 Amateur Championship

In preparation for the 1929 U.S. Amateur Championship, USGA Vice President (and co-founder of Cypress Point Club) Roger Lapham was put in charge of creating a team to prepare Pebble Beach for its first National Championship. In December 1927, Lapham turned to Robert Hunter—author of Links (1926) and then working with Alister MacKenzie on construction of Cypress Point—and amateur golfer H. Chandler Egan, who had won back-to-back U.S. Amateurs in 1904 and 1905.

The team re-shaped and re-bunkered each green. They moved the 1st tee to create today’s dog-leg opening hole, reconfigured the 10th hole to move the 9th green to the coastline, added length to the 2nd and 14th holes, and moved the 16th green to a natural depression behind a grove of trees, extending the hole more than 100 yards. MacKenzie, who had earlier rebuilt the 8th and 13th green complexes in 1926, was likely consulted for his opinion as well on the Hunter-Egan modifications.

Robert Hunter moved from Chicago to California in 1918, where he lectured on economics and English at the University of California, Berkeley. Hunter won the 1922 Gold Vase Tournament at Pebble Beach Golf Links.

He later took up residence at Pebble Beach, where in 1926 he wrote Links—the first book on golf-course architecture published in America. He met Alister Mackenzie on a golf trip to the UK and invited him to come to California. They worked together on designing several courses including Cypress Point Club.

Born in Chicago, Illinois, Egan played his first game of golf at the age of 12. He attended Harvard University where he became the captain of the golf team, winning three team championships and the individual title in 1902. In 1904, Egan won the U.S. Amateur Championship and an individual silver medal and team gold in the 1904 Olympics, the last games to feature golf until 2016.

Egan was bested by Jack Neville in the 1914 Pacific Northwest Amateur championship, but he went on to win in 1915, 1920, 1923, 1925 and 1932. He played on two Walker Cup teams. He began designing golf courses in 1920, including Eugene Country Club, Eastmoreland Golf Course and Riverside Golf & Country Club in Oregon. He died in 1936 and was named to the Pacific Northwest Golf Association Hall of Fame in 1985.

Born in Yorkshire, England, Alister MacKenzie trained as a medical doctor before taking up golf course design following World War I. He was one of the first prominent course designers who was not an avid player himself. He claimed that “the chief object of every golf course architect worth his salt is to imitate the beauties of nature so closely as to make his work indistinguishable from nature itself.”

In 1920, MacKenzie wrote Golf Architecture and moved permanently to the U.S. where he designed Augusta National Golf Club and Cypress Point Club, among others. His second book, The Spirit of St. Andrews, was published posthumously in 1995.

In 1998, golf legend Jack Nicklaus designed the new 5th hole on a parcel of prime oceanfront land that Pebble Beach Company had wanted to re-acquire for 80 years. It opened in November of that year to much critical acclaim.

Jack Nicklaus’ competitive career has spanned five decades, and his legend has been built with 105 professional tournament victories worldwide and a record 18 professional major-championship titles. He is the only player in history to have won each of the game’s majors at least three times (six Masters, five PGA Championships, four U.S. Opens, three British Opens), and is the only player to have completed the career “Grand Slam” on both the regular and senior tours. He is also the only golfer to have won the U.S. Amateur and U.S. Open on the same course—Pebble Beach (1961 and 1972).

Jack is a five-time winner of the PGA Player of the Year Award, has been the PGA TOUR’s leading money-winner eight times and runner-up six times. He has played on six Ryder Cup teams, captained two other Ryder Cup teams, and served as U.S. captain for the 1998, 2003, 2005 and 2007 Presidents Cup teams.

The legacy Jack has left as a player can be rivaled only by the legacy he is leaving as a golf course designer. Jack was named GolfWorld’s Architect of the Year in 1993, and in 1999, Golf Digest named him the world’s leading active designer. In February 2005, the Golf Course Superintendents Association of America recognized Jack with its highest honor, The Old Tom Morris Award.

In 2001, he was named recipient of both the Donald Ross Award (American Society of Golf Course Architects) and the Donald Ross Award (Golf Course Builders Association of America), and was honored with the International Network of Golf’s Achievement in Golf Course Design Award for 2000 – 2001.Jack has been involved in the design of close to 270 courses open for play worldwide, and his thriving business, Nicklaus Design, has more than 335 courses open for play around the world. Nicklaus Design courses are represented in 32 countries and 39 states, and at least 87 have hosted a combined total of more than 600 professional tournaments or significant national amateur championships. At least 60 Nicklaus Design courses have appeared in various national and international Top 100 lists.

As one of the principal owners that purchased Pebble Beach Company in 1999, Arnold Palmer paid personal attention to enhancing Pebble Beach Golf Links in line with the new technology that was resulting in many golfers hitting tee shots in excess of 300 yards.

The 1st, 2nd and 15th greens were rebuilt to USGA specifications and new hybrid bent grasses were sought (unsuccessfully) to out-compete the native poa annua greens. Several bunkers were added and reshaped, most notably to holes 1, 2, 4, 6, 15 and 18, and trees were planted to replace key trees that had died along the 90-year-old routing—including placing an 85-foot tall cypress near the front of the 18th green.

The ever-popular Arnold Palmer launched the professional golf world to new heights—turning pro shortly after winning the 1954 U.S. Amateur. His likeable personality and ability to win was the perfect combination to capture a newfound television audience to the sport.

“Arnie’s Army,” as his fan base is known, could follow his exploits on course and at home, and even in the movies when he did a cameo as himself in Bob Hope’s Call Me Bwana (1963). In the 1960’s, he even had his own television series, Challenge Golf, which he both hosted and played in matches on a variety of courses, including Pebble Beach.

His first of 62 PGA Tour victories came at the 1955 Canadian Open and he posted no less than one win each year thereafter through 1971. Half of those wins (including five of his seven majors) were recorded in the five year span of 1959-1963—a period when he was recognized as the #1 golfer in the world. He later won 10 times on the Champions Tour, and became the only golfer to compete at Pebble Beach in six different decades when he helped launch The First Tee Open at Pebble Beach in 2004.

Until his death in 2016 he remained active in many businesses including Pebble Beach Company and Arnold Palmer Design Company. Among his many golf awards were the Bob Jones Award (1971), Herb Graffis Award (1977), Old Tom Morris Award (1983), and Golfer of the Century. He was named as a charter member of the World Golf Hall of Fame when it was established in 1974.